As the rain poured onto the puddle-pocked pitch at First Tennessee Park, a grinning group of gold-clad supporters celebrated a future as bright as their heroes’ kits.

More than 9,000 fans welcomed Nashville SC into existence during a drenched friendly against Atlanta United. And nearly three weeks later, nothing except that untimely rain has dampened the enthusiasm Nashville SC fans hold for their club.

Since opening its account in a 3-1 loss to Atlanta United in that first friendly, the Boys in Gold are 1-1-1. Most recently, they beat Orlando City SC 3-1 in a closed-door friendly that opened the door for optimism among members of the side.

What an incredible week at @IMGASoccer! We had 3 challenging matches that made us all grow and become a better team. I couldn't have made a better choice than @NashvilleSC to kickstart my career. I'm learning more day by day thanks to my coaches and teammates! #OurTownOurClub

The club’s success resonates off the field, too. Fans have snatched up more than 5,000 season tickets and are approaching the USL first-season record of 6,200. Demand drove the team’s league home opener to Nissan Stadium, where the club aims to attract 20,000 supporters [click here for our opinion of whether that’s possible].

So, now what? What has gone well, what hasn’t, and where does the team go from here?

The main goal of this team must be to score them.

After all, an explosive playing style is a great way to sustain and grow a young fan base that is largely indifferent to the USL.

We applaud Gary Smith’s relentless, pressing defense, which is designed to force turnovers and lead to counterattacks on the other end. Atlanta and Chicago struggled to breathe in early action against the buoyant Boys in Gold. Nashville’s first-ever goal was a perfect example of the countering gusto the team plans to unleash.

In many ways, the question of “who” is secondary to the question of “how.” Will Ropapa Mensah or Alan Winn emerge as the lethal weapons the technical staff sought when they signed them, or will Hume, Shroot and Cox leverage their experience to head their way to the head of the pack? 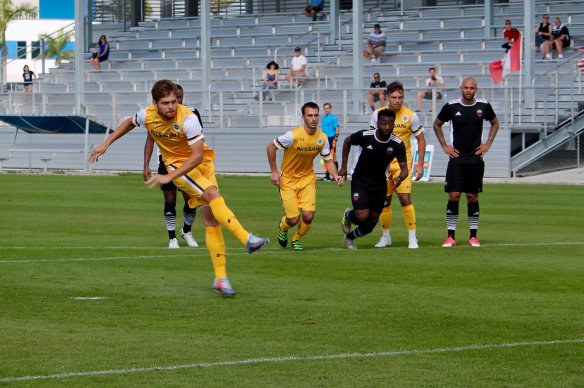 What does matter is how this team crafts its attack around the eventual starting forwards. If the cagey defensive vets set the tenacious tone and the midfielders make opponents’ lives miserable through controlled aggression, the chances and goals will come. When properly employed, Gary Smith’s style will turn the forwards into scoring vessels rather than talismans.

If all goes well, the system will do the work. The strikers will simply get their names in the box scores.

Fans need to remember that this is a young team — and we aren’t talking about the birthdays listed on the roster. Nashville SC itself is new in its current form, and with that will come mistakes and the inevitable feeling-out process.

We weren’t fans of the team’s decision to announce the Drive to Nissan via a television ad during the inaugural friendly, before issuing a press release or privately notifying season ticket holders.

The late announcement — just six weeks from kickoff — caught many fans by surprise and changed some gameday plans, including the tifo the NSC Roadies were designing. More vitally, it put the team behind the eight ball to sell tens of thousands of tickets in a short time span.

As a frame of reference, 47,000-plus fans watched last summer’s Gold Cup match at Nissan, but ticket sales for that match began nearly five months out, not six weeks. An earlier announcement could have increased the buzz for the Atlanta match and driven stronger sales numbers for the Nissan match, too.

The team has done a great job engaging and building its fledgling supporter base — just look at the attendance of the Atlanta United match or the season ticket sales figures. We also think it’ll enjoy a strong draw for the home opener. But the ramp-up process to that first home match reminds us that just as the team is developing chemistry on the pitch, it’s also learning to jell with its fan base.

Building Awareness by Constructing a Winner

That hiccup aside, we’re bullish on Nashville SC’s prospects of taking this town by storm. At this point, minor-league soccer’s growth in Music City is a matter of awareness. And the best way to build brand recognition is to win. Now.

Many Nashville sports fans are aware of the successful MLS expansion bid. But we’ve found that a surprising number of local supporters are completely unaware of the USL squad. They aren’t sure how it relates to the future MLS team or even what the USL is.

Some of that awareness problem will resolve itself as fans tell their friends about the matchday experience, Joe Dubin shows highlights and MLS expansion news bleeds into coverage of the existing team.

But the best way to dispel confusion about the present and capitalize on the widespread excitement about the MLS future? Winning. Immediately.

Fans need to see a connection between the present and the future. If they venture out to a match and watch Nashville score three goals in a league win, this team becomes relevant now, not in 2020 when it enters the MLS. If they watch the team get shut out and take a defensive posture, they’re more liable to stay away until Nashville ascends into the top flight.

If the team is compelling to watch, fans will start wondering which of these newly minted local stars will make the top-flight roster in a few years. They’ll evangelize to their friends about the raucous match environment. They’ll get caught up in the songs and chants. They’ll rally around a common cause.

If you spent any time on Broadway last June, you’ve already seen it happen on a much larger scale. That’s when a city with three rinks and two meaningful snows each year cemented its status as a hockey town. A non-native sport captured the souls of novice fans and they screamed in the streets, donning gaudy gold.

When it comes to Nashville SC, the end goal is the same. Heck, the color’s even the same.

And only one short month after announcing its debut roster, we think this team is off to a golden start.