Ropapa Mensah may have scored the first goal in Nashville’s history against Atlanta United, but Ryan James was the “unsung hero” of the game.

Nashville head coach Gary Smith gave the Canadian fullback this accolade after delivering an impressive athletic performance against one of the MLS’ best teams last season.

“He covered a tremendous amount of ground, his techniques were very good and he actually intercepted a couple times in really important moments on the back post,” Smith said of James. “Slowly but surely, he’s becoming quite a feature and he’s pushing himself into the reckoning.”

“He always had a funk about him where he could do things no one else could and get him out of trouble,” Nichols said. “That’s the funk we are talking about. He learned to position himself a bit better and not to rely on that stuff. He’s got more of complete game now and learned to use the funk in special moments.” 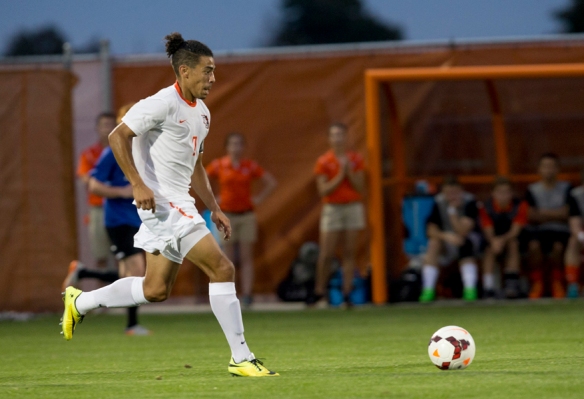 Nichols stumbled upon James by accident after traveling to Canada to scout a potential center forward. As Nichols puts it, he realized after 10 minutes the forward was not the guy for him but he had already driven seven hours across the northern border so he decided to stick around.

James was playing defensive midfielder in the game and the longer Nichols watched the more James caught his eye.

“I realized there was something with this kid,” Nichols said. “Ryan was playing at a low level in Canada and I could tell he should have been at a higher level of competition.”

James would turn out to be one of the best players in Bowling Green State’s history, never missing a single game during his college career from 2012-15. He played in 79 matches, scoring nine goals and tallying 15 assists. He helped the Falcons win the MAC Tournament Championship in 2014 with a 14-6-1 season record, which is the school’s best record since 1997.

“Every game we knew we had the best player on the field,” Nichols said.

Nichols thought he had recruited a “really quiet shy kid,” but quickly realized James had a ton of personality after putting him in front of a group of kids at a summer soccer camp.

“We have our players work these summer youth soccer camps and I always try to throw someone onto the hot seat.” Nichols explained. “I was addressing a group of kids at the camp and asked them if they had ever met a Canadian before, then said ‘we have the funniest man in Canada.’ I told James to come up to the front and tell a joke. I thought it would kill him and we were all waiting for him to bomb.”

To Nichols’ surprise, James told four of five jokes and got a few laughs. Nichols said James is now known as the “funniest man in Canada” to kids in the Bowling Green, Ohio community.

“We couldn’t have asked for a better player and person,” Nichols said. “He had a huge effect on this community and he can do the same thing in Nashville. The fans will want to buy his jersey.”

Stepping Up to the Pros

Sporting Kansas City drafted James with the 52nd pick in the 2016 MLS SuperDraft, but he was not signed by the team.

Nichols believes James was really close to breaking through at Kansas City, but said being a Canadian citizen hurt his chances because James would have taken up an international spot on the roster.

“From what I heard it was hard [for Kansas City] to let him go,” Nichols said.

James went on to play for the Rochester Rhinos, making 59 appearances and playing more than 5,000 minutes over the last two seasons. He tallied one goal and four assists for the Rhinos before joining Nashville this season.

Nichols has been impressed with his former player’s progression at the USL level and believes he’s ready for another shot at the MLS. Nashville was awarded the 24th MLS expansion franchise and will join the league by the 2020 season.

“He’s really close to reaching the MLS level and gotten better over the past few years,” Nichols said. “Ryan can handle it and is up to the task.”

Battling for a Starting Position in Nashville

Smith has started James with his senior XI at left wing back this preseason in his hybrid 5-3-2 to 3-5-2 formations.

Nichols played James as a box-to-box midfielder at BGSU, but he believes the 3-5-2 formation is perfect for James’ style of play because of his high work rate to cut out passes and win duels. James was one of the most disruptive players last year leading all USL midfielders with 100 interceptions.

“I always thought he was more of a flank player,” Nichols said. “His best scenario was in a 3-5-2 where he will get in and cause trouble because Ryan is so busy and active. He is always moving, nipping at stuff, reading passes and gets back in position and waits to nip it again.”

The 23-year-old has shown an engine that doesn’t stop working with an incredible range up and down the field this preseason. He’s drawn praise from Smith and looks like a lock to start in this role against Louisville City FC on March 17 when Nashville begins its 2018 USL regular season.

We can already hear Nashville’s supporters chanting “we want the funk!”

1 thought on “Ryan James has the ‘Funk’”