The Indy Eleven will be without starting center back Karl Ouimette against Nashville SC on Saturday. The 25-year-old defender was suspended for one game after receiving a red card against North Carolina FC for violent conduct.

Ouimette and North Carolina’s Aaron Guillen had to be pulled apart in the 93rd minute after getting into a wrestling match inside Indy’s penalty box. Guillen was also given a red card and a one game suspension.

This is a key loss for Indy’s defense which has allowed only one goal in three games. The Canadian international has been the rock of Indy’s backline starting all three games this season and playing 269 minutes. Ouimette leads the team in interceptions (12) and tackles won (7).

Before signing with Indy, Ouimette made 23 appearances for the San Francisco Deltas helping the club win the 2017 NASL Championship.

Ouimette and David Edgar, Nashville’s newest signing, are former teammates. Both men played together for the Canadian Men’s National team in different international competitions including World Cup qualifiers and the 2015 CONCACAF Gold Cup.

Who Will Replace Ouimette Against Nashville?

Indy’s defense was already thin before losing Ouimette to suspension, but look for Brad Rusin to fill his spot. The 31-year-old defender made his first appearance of the season last week replacing Carlyle Mitchell in the 93rd minute against North Carolina. Mitchell took a knock and limped off the field at the end of the game.

Rusin is a soccer journeyman playing stints the Danish Superliga for HB Køge, in the NASL for Miami FC and he made 19 appearances for the Vancouver Whitecaps in 2013. 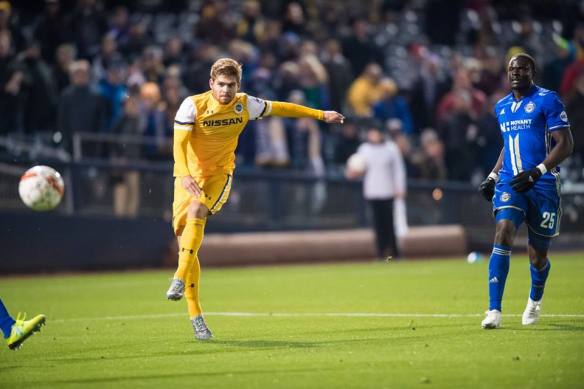 Nashville’s attack has been energized by Alan Winn. After sitting on the bench for the first two games of the season, Nashville head coach Gary Smith inserted the first-year pro into the starting XI against Bethlehem Steel FC and Charlotte Independence.

Smith called Winn relentless after he scored the go-ahead goal against Charlotte in last Saturday’s 2-0 victory.

“As a forward, you always have that mentality of keep going, keep going, and have a short-term memory of when you do miss, you’ve got to keep going,” Winn said after the game against Charlotte. “This game never stops, even if we would have lost this game, you have to keep going and make results and score goals. I would say that’s a very humbling characteristic they said for me, and I hope I can show for it each game week in and week out.”

Look for Winn to use his pace to put Indy’s backline in dangerous areas and create more scoring opportunities for his Nashville teammates.