Future MLS sides Nashville SC and FC Cincinnati locked horns for the first time in the USL regular season Saturday at Nissan Stadium. The two sides, however, could not come to a conclusion on who the better team was and drew 0-0. The result keeps Nashville in fifth place in the USL Eastern Conference with 27 points, while Cincy remains up top.

Nashville had two quality chances in the first half, which both came near the end of the period and both from Lebo Moloto. Moloto blasted a header towards goal, which called Evan Newton into action.

A couple of minutes prior, he did this.

It was a bit of a surprising demolition of possession from Nashville, as they dominated in that category, as well as on the shot chart. However, not many of those chances bothered Newton other than Moloto’s first half header. The few couple of shots the Boys in Gold got on target went right at Newton.

Matt Pickens did come to the aide of Nashville a couple of times late into the match right before stoppage time. One chance he broke up a fast break.

Nashville SC will take on Charlotte Independence Wednesday. Check out our photo gallery from the match below. All photos were by Golden Goal’s Andy Simmons.

Lebo Moloto looks up for a teammate. Golden Goal 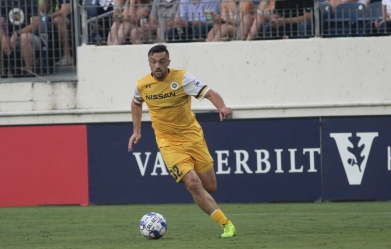 The starting 11 for Nashville SC says a quick final word to each other before the match against FC Cincinnati.