Nashville SC came away with a 0-0 draw against future MLS side FC Cincinnati Saturday night at Nissan Stadium. Here’s how the Speedway Soccer Pod rated each player’s performance. 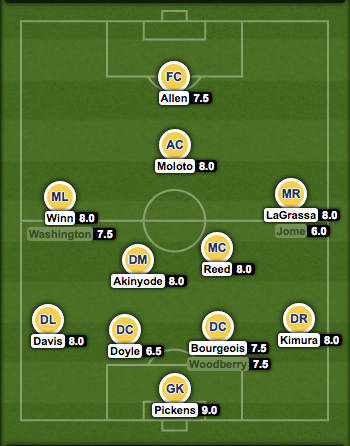 Gary Smith – 7.5: Set up his team well and they looked likely to score multiple goals in the first half. Can’t be blamed for poor finishing. Was a little slow to make changes, especially to the wide players, but Bourgeois’s injury definitely complicated his substitution patterns.

Matt Pickens – 9.0: Didn’t have an incredibly busy night, but made two key saves in the last five minutes to keep Cincinnati from stealing three points.

Kosuke Kimura – 8.0: Worked hard all night, keeping the left side of Cincinnati’s attack pretty quiet. Got into the attack well and was always available to receive a pass.

Bradley Bourgeois – 7.5: Made a valiant effort, but was visibly struggling from the first few minutes. Still put in a good shift and shut down a couple Cincinnati attacks, but couldn’t last past the 53rd minute and was replaced by Woodberry. Hopefully it’s not a long-term injury.

Liam Doyle – 6.5: Shaky. Was lucky not to be called for a penalty kick in the first half, and was incredibly nonchalant in an attempt to win a ball deep in his own half, letting Cincinnati through on goal. Pickens bailed him out, but it wasn’t his best showing.

Justin Davis – 8.0: Found himself in all kinds of space on the left and took advantage of it, serving some fantastic balls into the box and creating four chances. Left Doyle isolated once or twice, but overall one of his best showings of the season.

Matt LaGrassa – 8.0: Fluctuated between a central and a wide role, rotating with Moloto. Always dangerous around Cincinnati’s box and saw some strong shots go just wide. He’s in a good run of form, but he needs to put some of those efforts on frame. Came off for Jome after 79 minutes.

Michael Reed – 8.0: The captain was everywhere. He passed aggressively and got in positions to shut down several Cincinnati passing moves. A good showing.

Bolu Akinyode – 8.0: Completed a casual 90 percent of his passes and made five tackles. Just another day at the office against the best team in the east. He’s quietly making a case for Nashville’s best player of the season.

Alan Winn – 8.0: One of Nashville’s best players on the night. Pacey and lively on the ball, giving former Arsenal defender Justin Hoyte all kinds of problems. Created three chances and was unlucky not to notch an assist. Came off for Washington after 73 minutes.

Lebo Moloto – 8.0: Dangerous all night, but loses points for poor finishing. Hit the post from 20 yards and missed two headers from close range, one just glancing past the far post and one saved by Newton for point blank range. Overall a good night, but his job is to score goals and he didn’t.

Brandon Allen – 7.5: Was dangerous in Cincinnati’s box. Had several good looks, creating two chances and taking five shots. Probably should have scored, though, and was gassed towards the end. If Bourgeois hadn’t been forced off with injury, Allen probably would have made way for Ropapa.

London Woodberry – 7.5: Replaced the injured Bradley Bourgeois after 53 minutes and picked up where he left off, defending well and passing well out of the back. Could see more time depending on how long Bourgeois is out.

Taylor Washington – 7.5: Came on for Winn and continued to stretch the field. Put a few decent balls into the box and kept Cincinnati’s defense occupied.

Ish Jome – 6.0: Replaced LaGrassa after 79 minutes and was pretty invisible. Hasn’t been good in recent weeks.